Endometrial polyps are noncancerous (benign) growths attached to the inner wall of the uterus (endometrium). They are localized overgrowth of cells/small tissue that vary in size from a few millimetres to some centimetres. There may be just one or many and they can be flat in shape or protrude with a long stem.
Although in most cases they are benign, in rare cases, they represent an early phase of cervical cancer and removing them helps reduce this risk. The risk of having malignant polyps is low in women of childbearing age but this risk increases with age. The presence of polys has been linked to difficulties to conceive.
A hysteroscopy, a minimally invasive surgical procedure, is the recommended procedure for the removal of any polyps. Removing the polys increases fertility and reduces miscarriages. Furthermore, it reduces the menstrual flow in women with heavy periods (menorrhagia) and they no longer have irregular bleeding.

Uterine fibroids also known as fibromyomas or leiomyomas, are the most common benign tumors that develop in the uterus. They consist of smooth muscle cells and connective tissue. They are usually hard, round, well-separated growths that can grow anywhere inside or on the uterus (Subserosal fibroids, grow on the outside of the uterus. Intramural fibroids grow inside the muscular wall of the uterus. Submucosal fibroids grow into the open space inside the uterus. Some fibroids become Pedunculated, having a stalk that attaches to the uterus.)
Their size range in size from seedlings (undetectable by the human eye) to bulky masses. You can have single or multiple fibroids.

It is unclear why they form, and research suggests they develop when oestrogen levels are higher (pregnancy, reproductive age, ovarian stimulation, and exogenous oestrogen intake) whereas they rarely develop in young women under 20 years while their size decreases after menopause.
In evaluating cases of uterine fibroids, the doctor considers multiple parameters such as the number, the location, and size of the fibroid as well as the age of the patient, fertility issues, and the presence of any symptoms.
Symptoms include heavy periods (menorrhagia) if they are submucosal or intracavitary, painful periods, pelvic pain if the fibroids are large in size, frequent urination if they put pressure on the bladder, and difficulty conceiving if they are intracavitary or large intramural.
When and if surgical removal is recommended, it is possible both laparoscopically and/or robotically. Submucosal or intracavitary fibroids can be removed via a hysteroscopy with precision and safety.
Hysteroscopic removal of submucosal fibroids increases fertility, reduces miscarriages and reduces the menstrual flow in women with heavy periods (menorrhagia).

An ovarian cyst is a sac or sac filled with fluid or other tissue that forms in or on the ovary. Ovarian cysts are an extremely common condition and may, to a small extent, pose a risk to a woman’s health.

Most women with ovarian cysts have no symptoms and this cyst is usually discovered by chance during a detailed gynecological examination or a routine ultrasound.

However, some cysts may cause symptoms which in some cases, may be severe. They include:

When the ovarian cyst is characterized as a simple cyst and is less than 4 cm, then it is usually decided to simply monitor it with ultrasound. These are functional cysts and usually disappear within 2-3 months.
Cysts that do not disappear after 2-3 months usually need surgical removal. In some cases, it is clear through ultrasound evaluation that, even though the cyst is benign, such as endometrial cysts, dermoid cysts, ovarian cystadenoma, etc, it will not disappear on its own, and in such cases, surgical removal is done laparoscopically.

In case of suspicious ultrasound findings, surgical removal of the entire tumour is performed by laparoscopy. The tumor with the ovary is placed in a bag (laparoscopic endobag) and is carefully removed so that there is no spread of cancer cells in case of malignancy. A rapid biopsy is then performed and depending on the biopsy results, in some cases further specialized surgery may be required by the oncology team. This team includes several specialists, in addition to Dr. Kakkoura including a surgical oncologist, radiotherapists, and histopathologists. In case this group needs to be activated, the specialised doctors work closely with Dr. Kakkoura during and post-surgery to determine the treatment protocols that will be followed in each case.

An ultrasound (to identify the location of the fetus) and a blood test to check the hormone levels of hCG confirm the ectopic pregnancy.

Early diagnosis is very important because the ectopic pregnancy can cause the woman’s fallopian tube to burst or rupture leading to abdominal bleeding and threatening the life of the woman.

Under certain conditions and circumstances, a non-invasive, conservative treatment may be recommended with cytostatic medication.

There are a few options for a hysterectomy:

Pelvic organ prolapse occurs when the muscles and ligaments supporting a woman’s pelvic organs weaken and the pelvic organs can drop lower in the pelvis, creating a bulge in the vagina (prolapse).
Some women with pelvic prolapse have no symptoms other than palpation of the prolapsed organ. Other women may experience pelvic or abdominal pain, pain on contact, heaviness in the genitals, frequent urination, urinary incontinence, bladder incontinence, urinary tract infections, abnormal vaginal discharge, and constipation.
Non-surgical treatments for pelvic prolapse include pelvic floor physical therapy and Kegel exercises and /or the use of vaginal ring pessary (medical device resembling the outer ring of a diaphragm used to support the pelvic area).
Reconstructive pelvic organ prolapse repair surgery aims to hold the organs in their correct locations. During surgery, the surgeon moves the organs back to their original positions and may implant surgical mesh support to keep the organs from moving. This process is done using robotic surgery.

Gynaecologic cancer is any form of cancer that starts in one of the woman’s reproductive organs and includes: Cervical, uterine, ovarian, vaginal, vulvar, and fallopian tube cancer. The most common is in the cervix, the endometrium, and the ovaries. It rarely concerns the fallopian tubes, the vagina, and vulva.
Each form of cancer has different symptoms and predisposing factors.
Women are encouraged to have annual gynaecological tests that include a gynaecological checkup, the Pap smear, and a gynaecological ultrasound, as treatment is most effective when the cancer is identified at an early stage.
Should a woman experience any of the following symptoms”, she should consult a gynaecologist :

Within the framework of offering a complete and integrated treatment to patients dealing with gynecologic cancer, a special oncology team has been created which, in addition to Dr. Kakkoura, includes special oncologist surgeon Dr. Aggelos Sioutas, Director of the Oncology Surgery Clinic in Stockholm, who has extensive experience in cancer surgery. The team is furthermore supported by a specialist histopathologist, while there is full cooperation with the oncologists of the oncology centers in Cyprus. 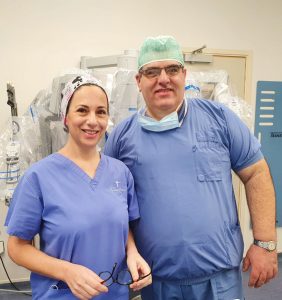 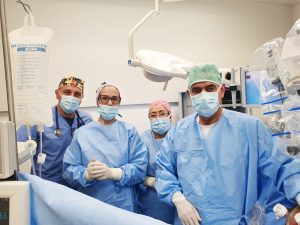 How is appropriate surgery chosen to treat the various Gynaecological Conditions?

Treatment options for gynaecological conditions usually depend on the following factors: Any gynaecological condition which requires surgical intervention/procedure should be personalized and evaluated on a case-by-case basis so that the most appropriate surgical method may be chosen for each case.
Below we list the main invasive surgical procedures available:

The treatment of abnormalities of the cervix (polyps, fibroid tumours, diaphragms and adhesions) is done using a hysteroscope, a thin, lighted telescope-like instrument that is inserted into the woman’s uterus through the vagina. It allows the doctor to better examine the cervix and inside of the uterus and in case of operative hysteroscopy, small instruments are inserted through the hysteroscope to treat/correct the condition.

With open surgery, doctors make a large incision on the patient’s abdomen. The exact size of the incision will depend on the type of procedure being performed. Open surgery also called laparotomy, allows doctors to touch and feel key organs as they operate.

Laparoscopy is a minimally invasive surgical procedure by which the surgeon inserts small surgical instruments and a camera inside the abdomen via 3 small incisions (around 5cm each). Carbon dioxide is pumped into the woman’s abdomen and this further helps the surgeon see the organs more easily and operate.
It is possible to magnify the operating area on the screen and this provides an advantage over open surgery.
An additional advantage of laparoscopy over open surgery is the decreased recovery time as well as the lower likelihood of post-surgery inflammation. 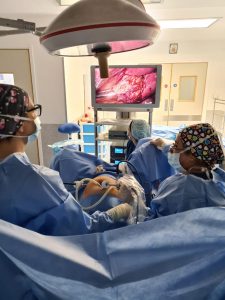 Robotic surgery is an advanced laparoscopic procedure, only with an added layer of technology.
The surgery is conducted in a similar way as the laparoscopy in that both procedures use small incisions, a camera, and surgical instruments. In the case of robotic surgery, instead of holding and manipulating the surgical instruments, the surgeon performs the surgery via the console of the robotic surgery system*. The console gives high-definition, magnified, 3DHD views of the surgical area and allows the surgeon to controls a set of tiny “wristed” instruments. The console translates the surgeon’s hand movements in real-time, with instruments bending and rotating like a human hand but with a far greater range of motion for more precision, flexibility, and control than is possible with conventional techniques.
Thanks to robotic surgery, it is possible to perform many types of complex procedures which would have otherwise led to open surgery. For example: 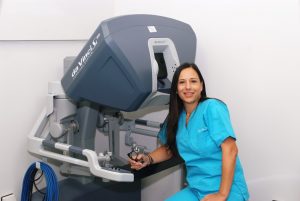